No items in your Wishlist.
Wishlist 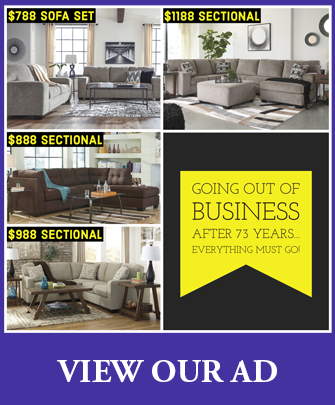 Sixty years ago, in 1946, Harold Perlmutter who was a recently discharged World War 2 veteran established Harold’s Furniture in Lebanon. The original store was located at 707 Cumberland Street trading under the name of Harold’s Home Furnishings. The business was successful from the outset, as Harold was able to find suppliers who could fulfill the needs of the local populace. The store carried an abundant supply of various house wares and home furnishing items as well as appliances and television sets.

By 1959, the business was doing well and expanded into the adjacent building with a ten thousand square foot expanded furniture showroom. The name of the store then changed from Harold’s Home Furnishings to Harold’s Furniture. This was the early era of the “baby boomer” generation as children, and Harold was well prepared to furnish the local homes with his concept called “Three Rooms of Furniture”.  This promotion consisted of living room, bedroom and dining room suites at one low price.

During the 1960’s and 1970’s, Harold continued to focus his efforts on home furnishings and major appliances as the house ware business declined due to the increased competition from the new shopping malls and grocery stores. In 1975 Harold’s son Stu Perlmutter joined the firm after graduating from Pennsylvania Military College and service as a First Lieutenant in the U.S. Army. Harold’s Furniture moved one block east to 614-620 Cumberland Street in 1979. This move enabled the business to increase its showroom space to twenty five thousand square feet. This was a large step for the company as store sales skyrocketed by being in such a large and prominent location.

In 1985, Harold’s began to offer a full line of office furniture in addition to its regular furniture lines. This  expansion to the commercial furniture market, allowed the store to service businesses as well as consumers. The store name at that time was changed from Harold’s Furniture to Harold’s Home and Office Furniture in order to better reflect the two fold nature of the business.

In 2005 Harold’s moved to 2500 West Cumberland Street, which was two miles from the original store. Moving the business after many decades was a most difficult decision as well as a logistical challenge. A seventeen thousand square foot building that had been an automobile dealership for many years became the new home for the business once again known as Harold’s Furniture. From their new site, Harold’s is better able to serve the both the western and eastern parts of Lebanon County as well as the surrounding areas. This year Harold’s Furniture will be celebrating their Sixty Fifth Year in business proudly continuing to utilize the slogan, “ Lebanon’s Oldest and Largest Furniture Store”